Like for previous projects, also for the “Timber House” the client sent us a 3d .dwg file modeled with a software different from 3D Studio Max, probably with Revit.
The Autocad file was imported in 3dsMax and converted in Editable Poly. Unfortunately, while converting the file, we lost some geometries so in the first stage of the modeling process, we had to complete the model with the missing surfaces. 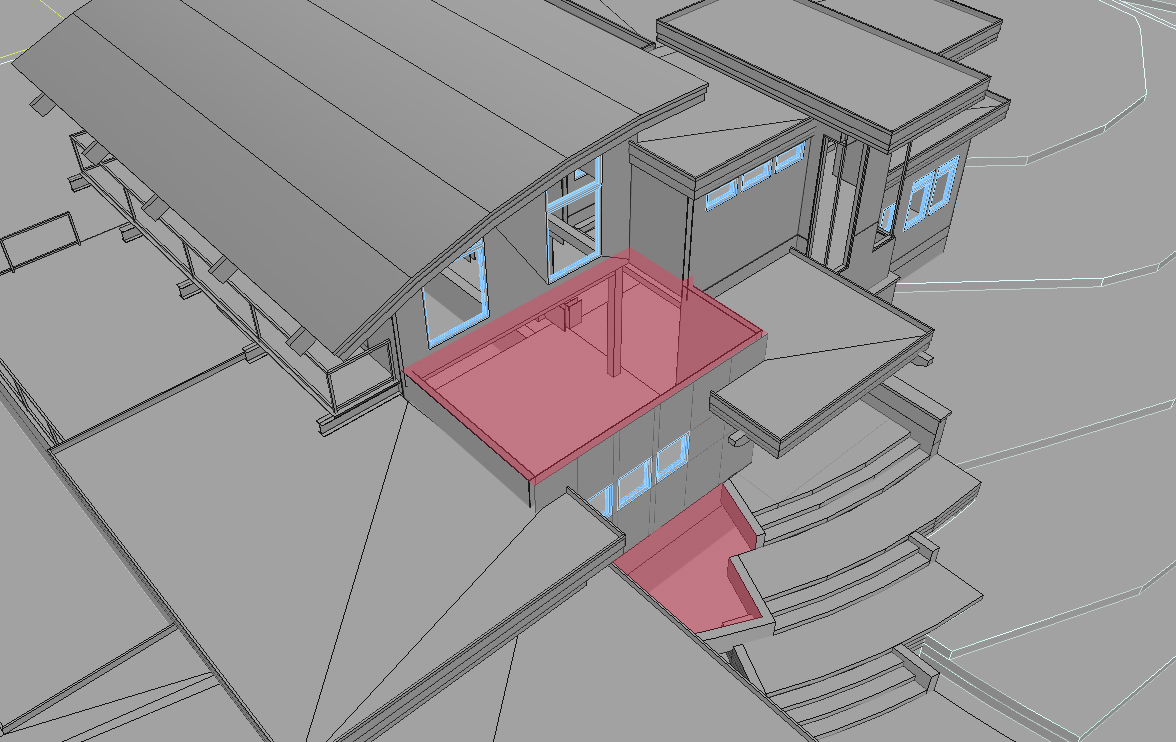 According to our client’s needs and our directions, we arranged some proposals for the point of view to use.
To the model we applied the Corona’s default shader (medium grey) and for the lighting set up we used the Corona Sun combined with the Corona Sky in the environment node. 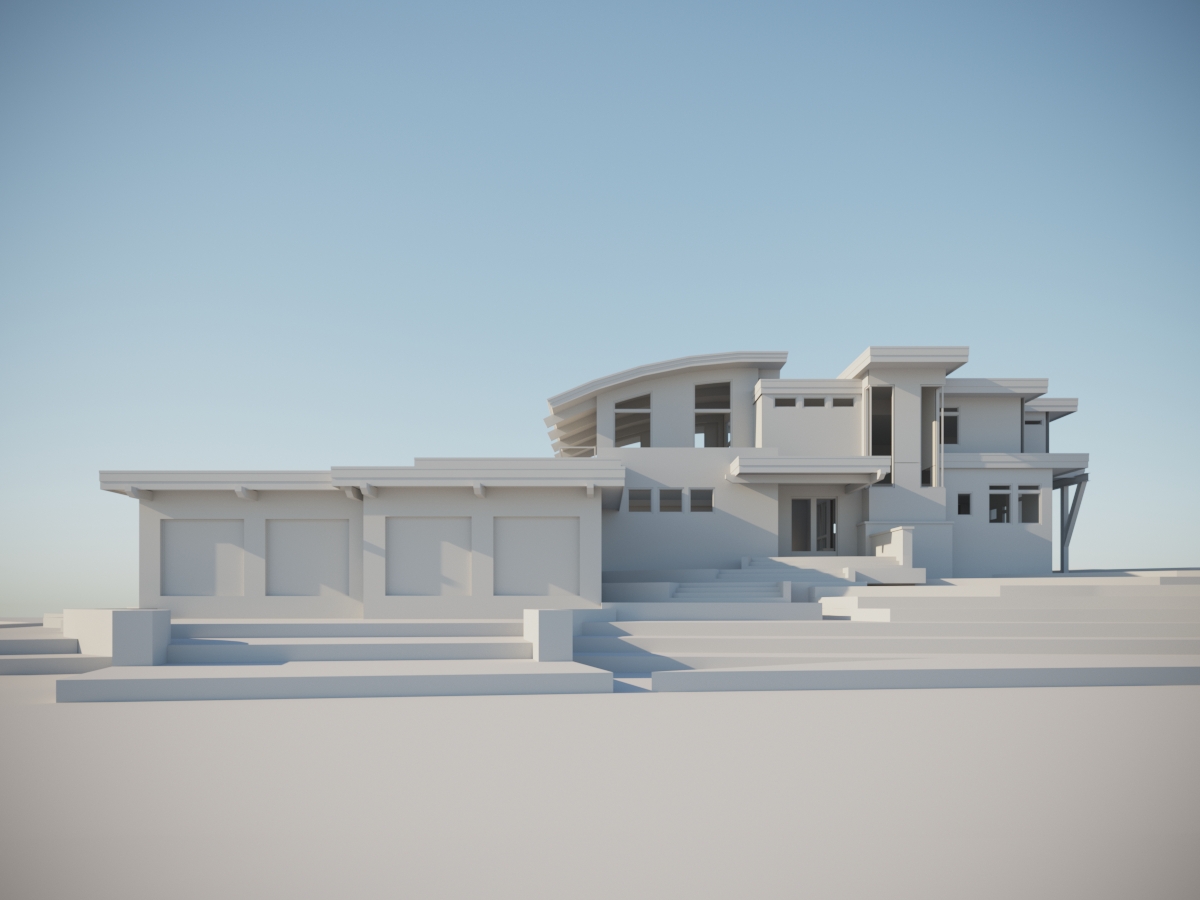 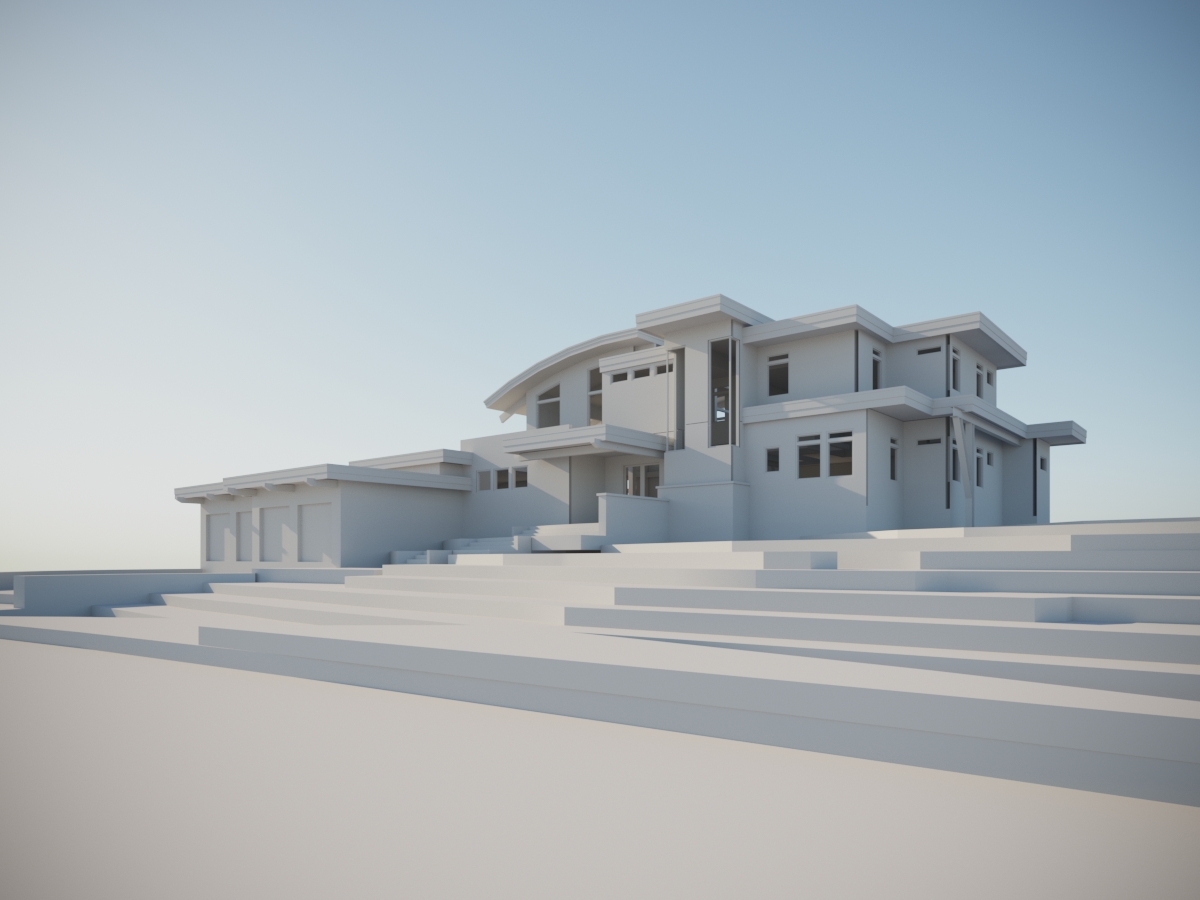 The selection of the point of view

The composition was made to highlight the volumes and the particular shapes of the building.
At the beginning we thought of a frontal image with central perspective and later the choice was changed into a three-quarter view to highlight the depth of the architecture and create a direct relationship between the house and the garden around it.
From the compositional point of view, in this way we could take advantage from the frond of a tree in the foreground, which was used to enhance the curvilinear shape of a part of the roof. 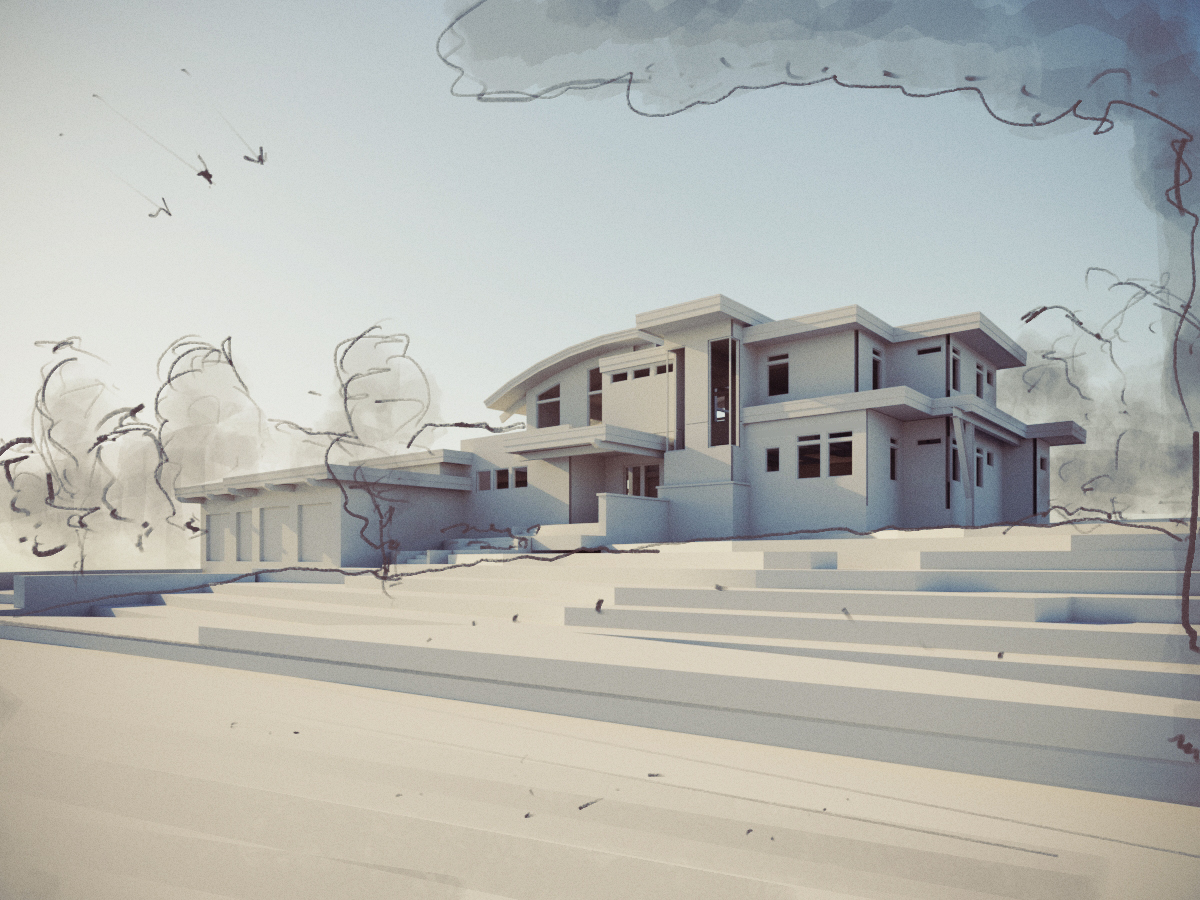 The frond also created a natural vignetting on the image, which further higlhlight the building.

For the final model, all walls have been edited and remodeled.
The topology wasn’t correct because the loops corresponding to the openings were missing and the angles were completely open. We adjusted also the smoothing groups in accordance to the topology of the single pieces so that the smoothing groups were different at every change of direction.
Thanks to these adjustments, we could create the chamfers in the right places. 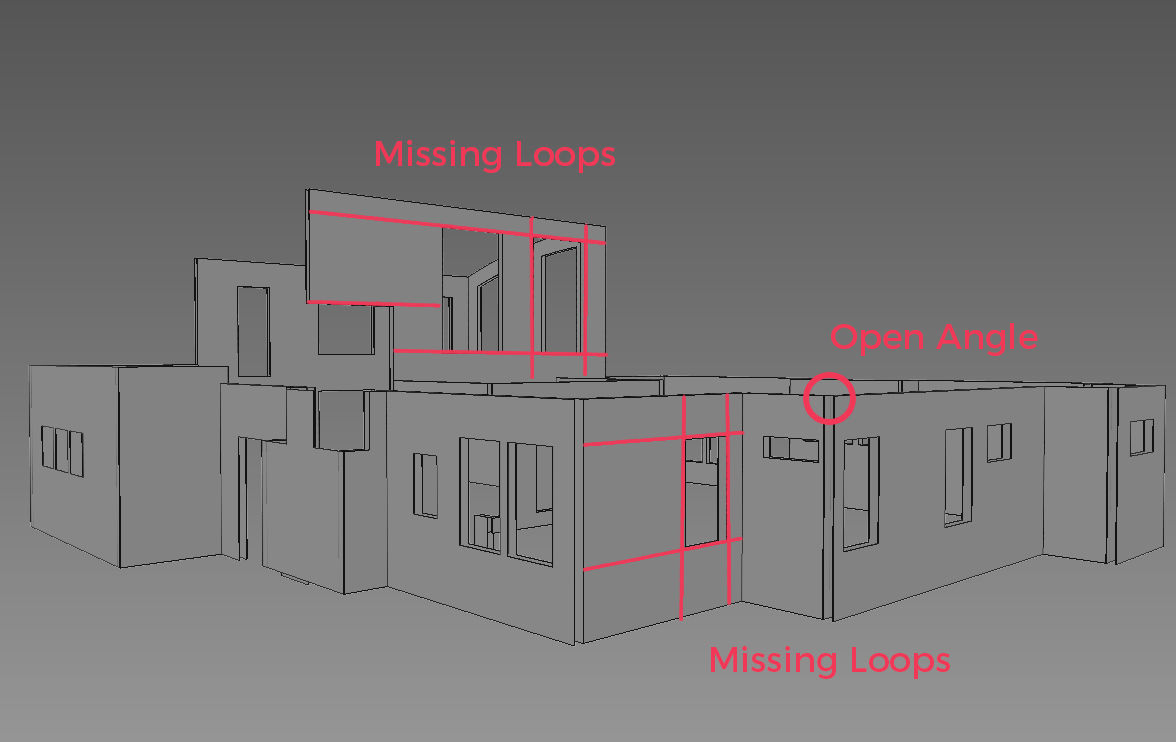 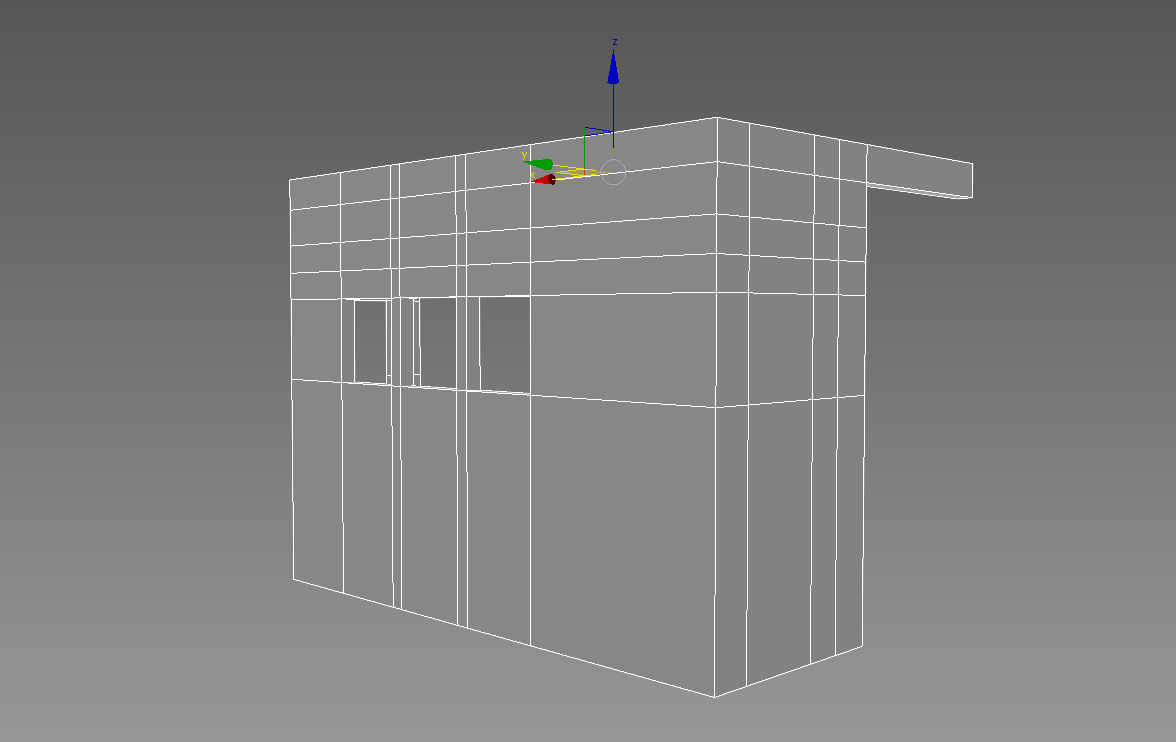 Windows and doors have been detailed with the insertion of:
– Chamfers on all metallic elements with an amount of 5 mm (Unsmoothed Edges mode used also for the walls),
– Rubber round seal,
– Single glasses with thickness of 2,5 mm. 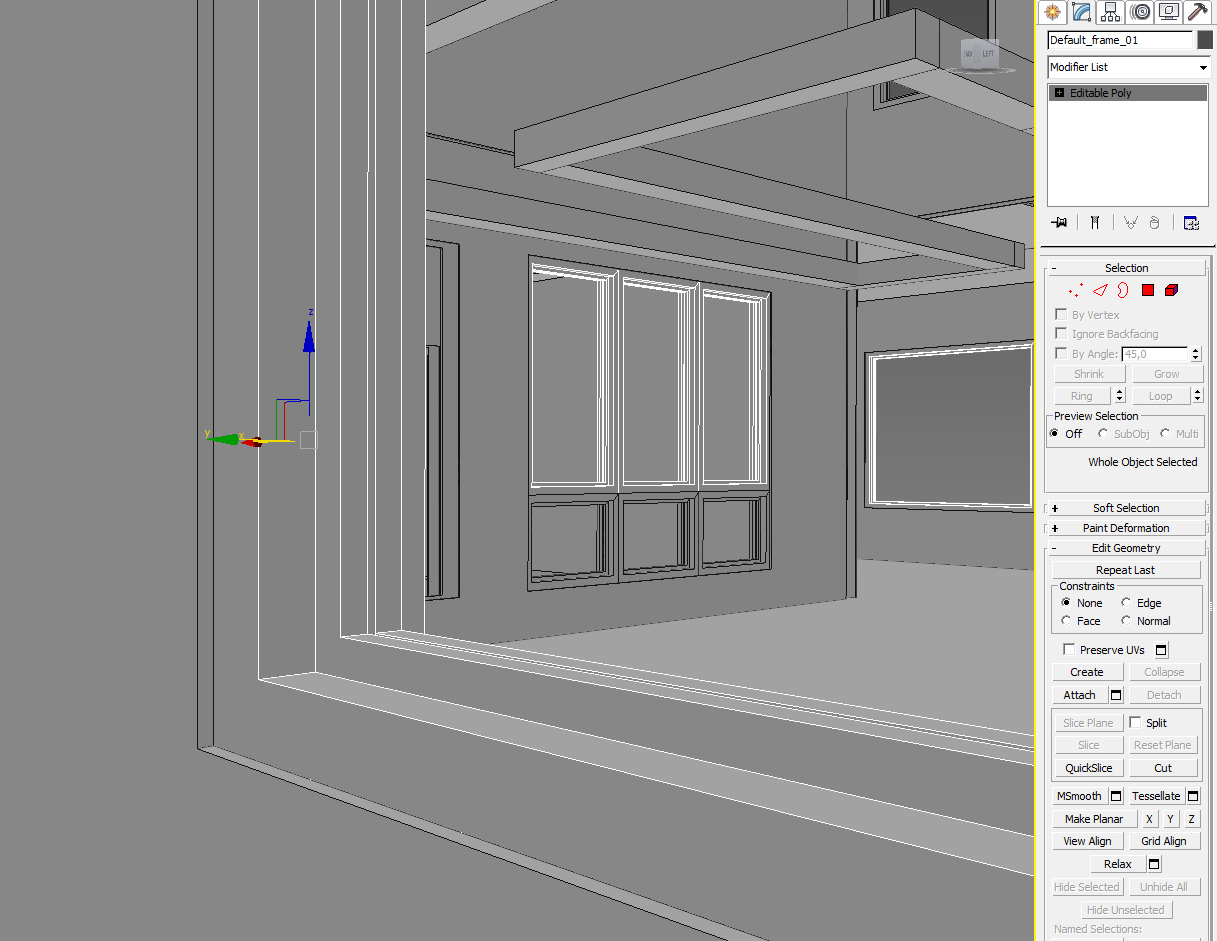 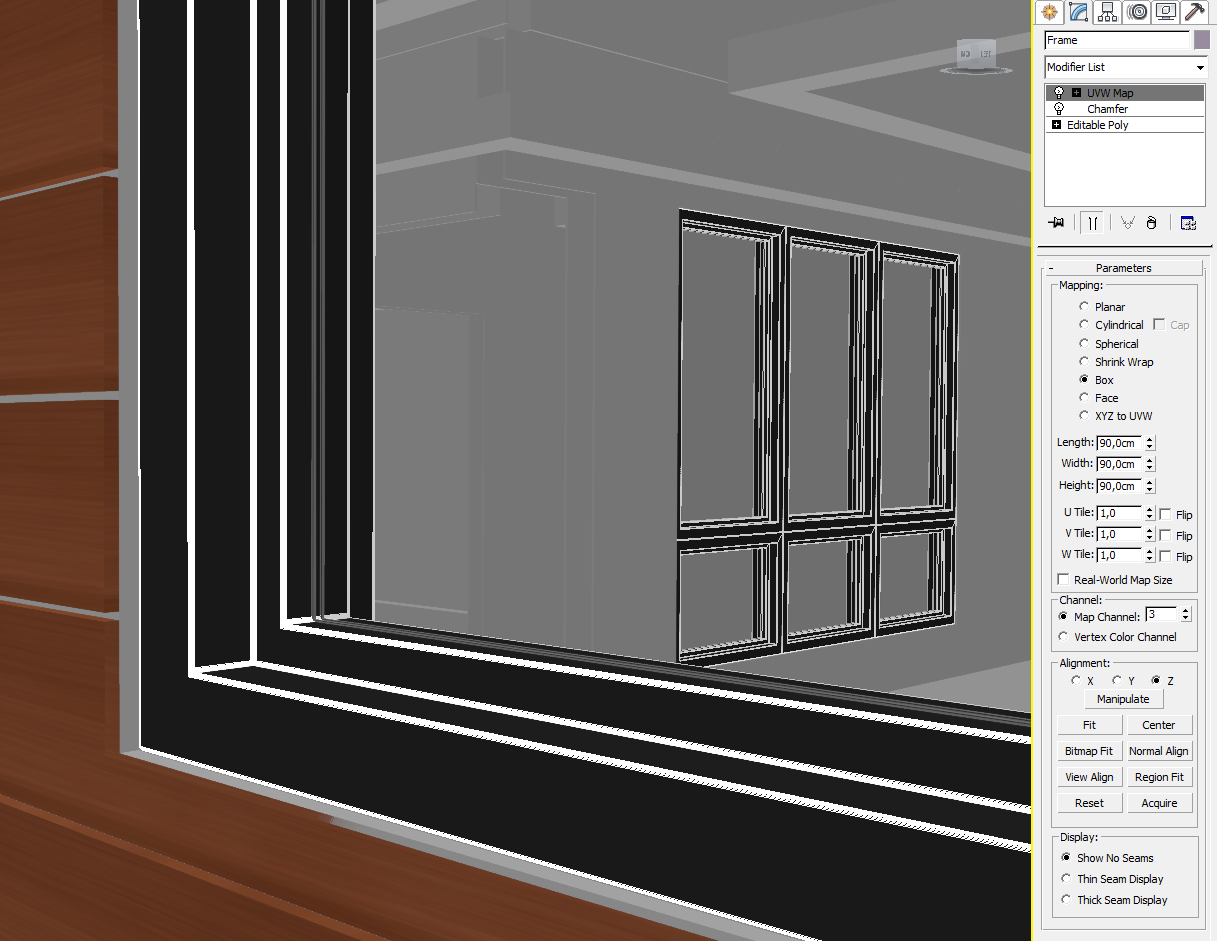 For the wooden facades we used Railclone.
Thanks to the 1S Linear generator with clipping mask, we create continuous facades for every side of the house. The textures used for the shading were added in a multitexture node and thanks to the material operator, the randomization of the single elements has been made with the Object ID mode.
We applied the same material to the single plank and with an UVW map we checked the map and the direction of the wood grain.

Modeling of the ground and of the street surfaces

The ground modeling was very simple. The graded depth that the client sent was the starting point for the altitude. Starting from a plane, we expanded the surface and kept the faces as squared as possible in all the development.
For detailing and creating real variations on the grass, to the object:
– we added a Noise modifier (with a couple inches variation in x,y e z );
– we precisely changed some parts of the geometry with a soft-selection (inside the edit poly) to create dips and protuberances;
– we added a couple of turbosmooth modifiers to smooth the surface and increase the number of polygons.

To finish the ground we applied a shader with the grass texture mixed in composite with other ground textures. 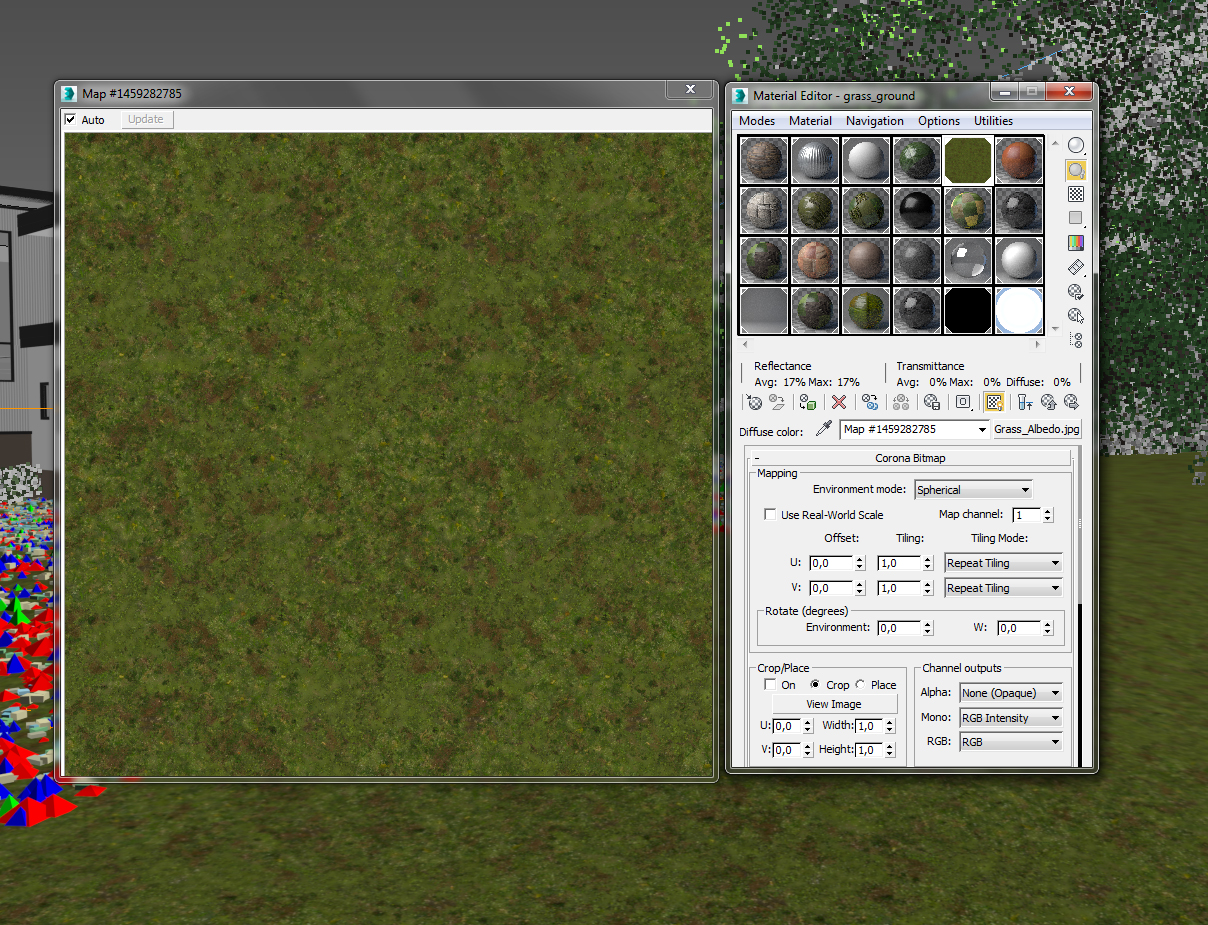 For the vegetation we used Megascans, GrowFX and some Evermotion trees.
We gave importance to the translucence of leaves and grass with a parameter that can be easily customized with Corona Renderer. The result is very close to reality. 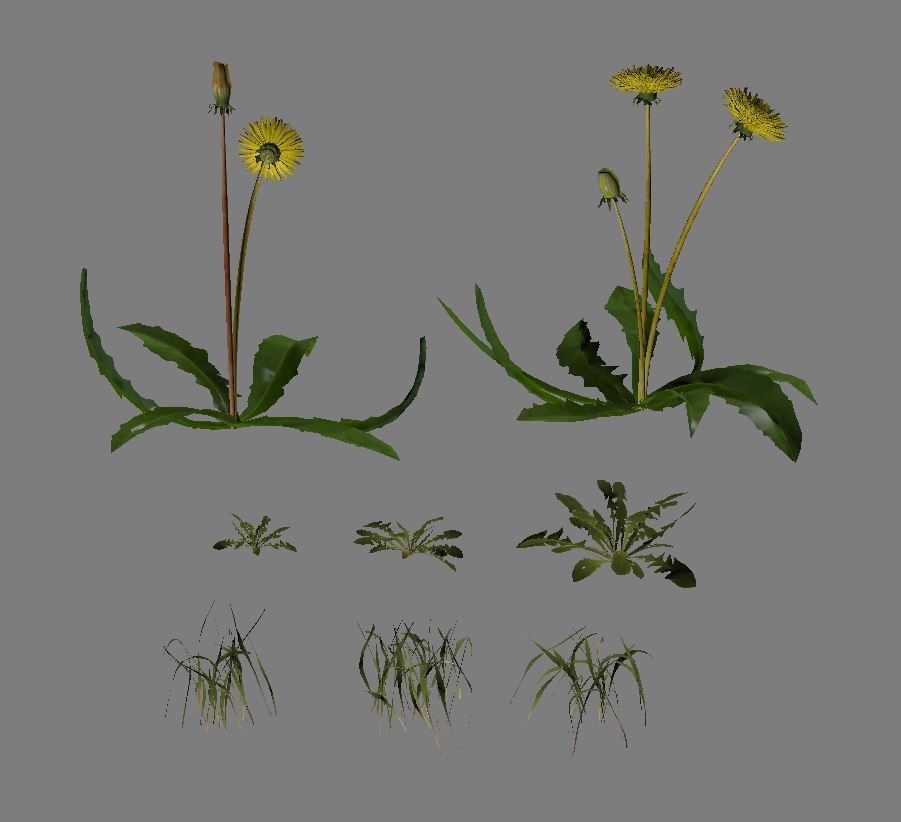 The grass was created from Megascans’ textures. We created groups of simple grass and groups with denser grass with wide leaves to differentiate the scattering with Forest.
We also scattered dry leaves for the street and the garden. These leaves are customized models made with DebrisMaker script.

The client requested a particular material for covering some facades, which was made of stone blocks with variable dimensions and colors.
Substance Designer is the tool that let us create such materials in an easy way. 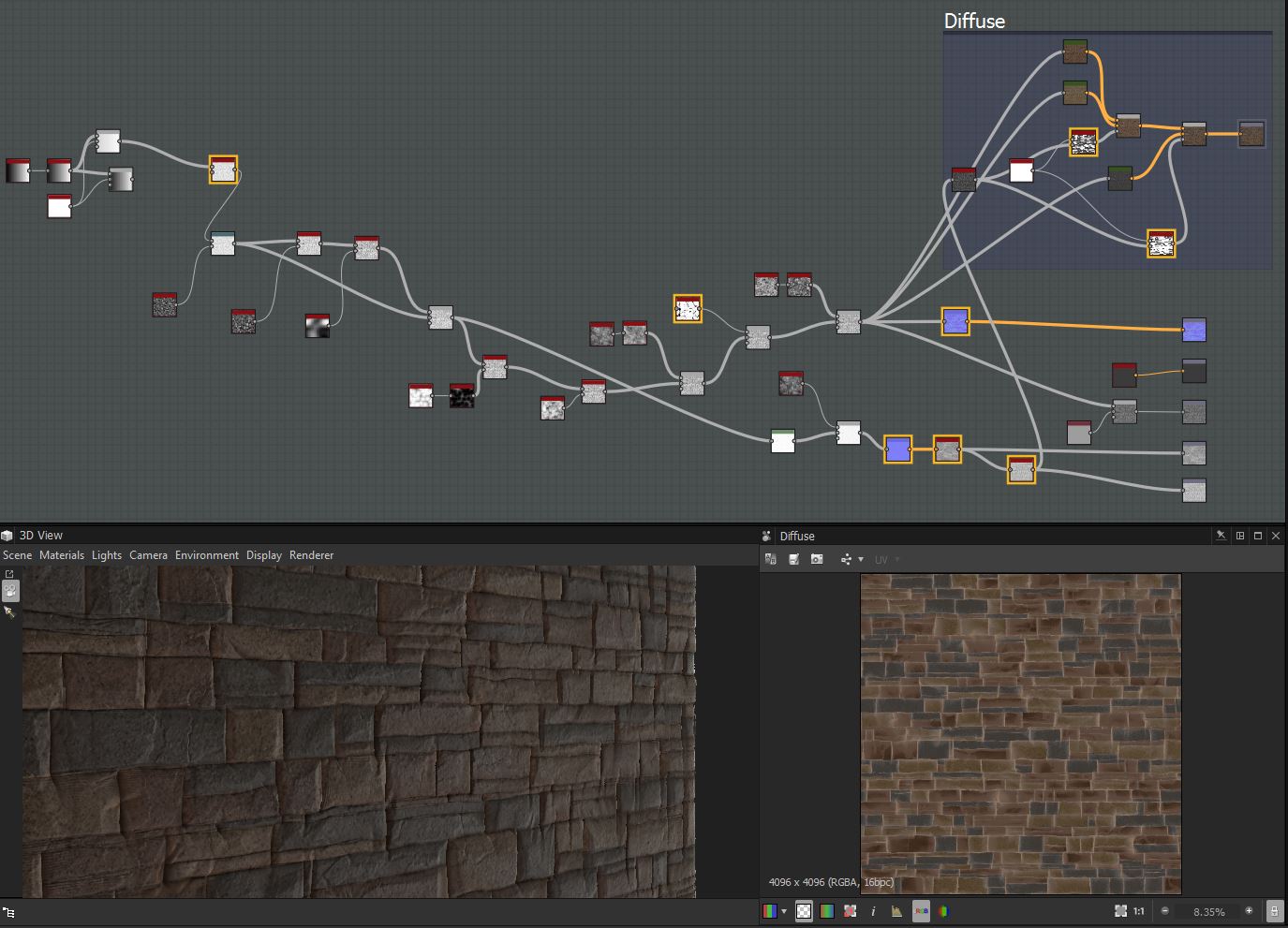 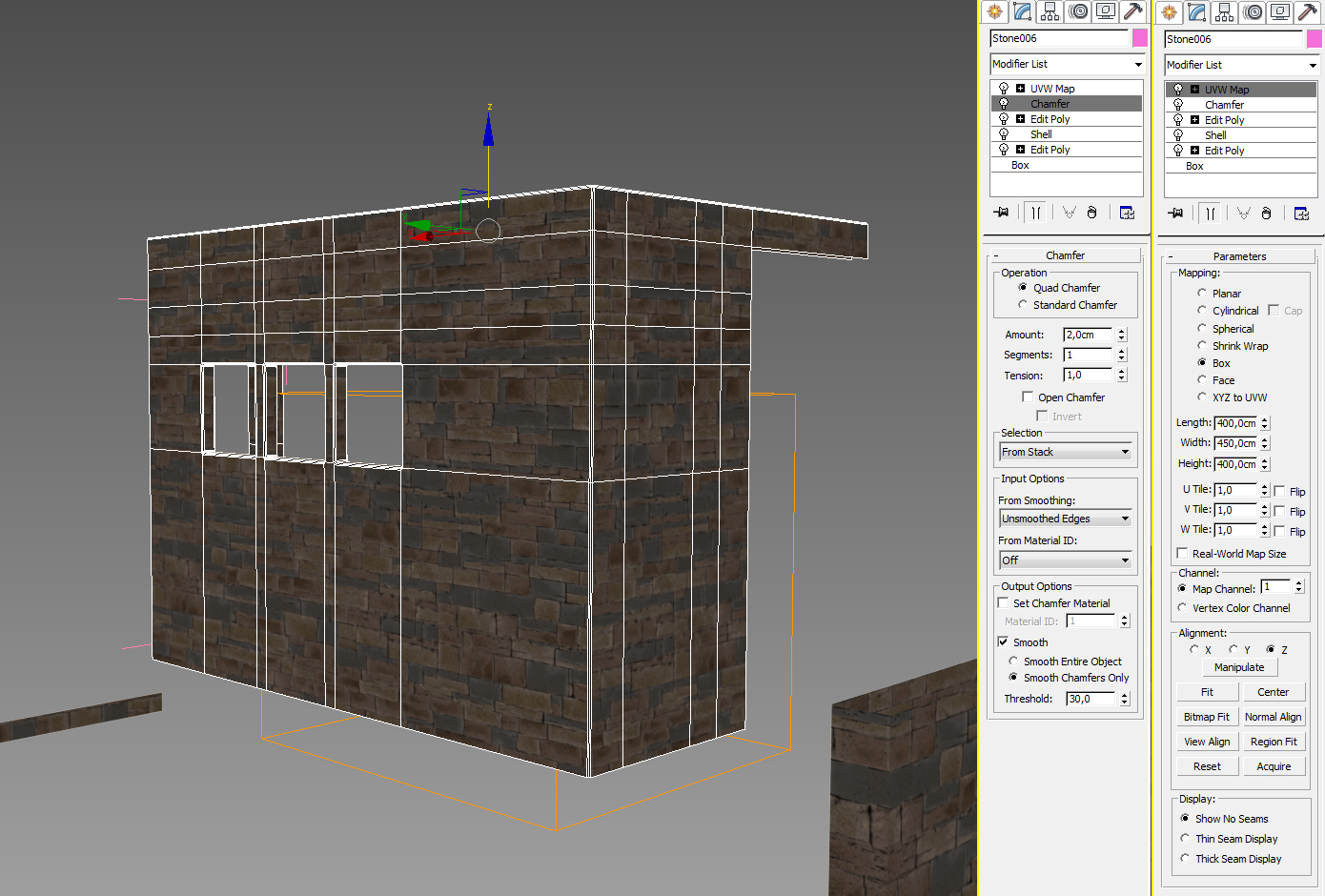 All materials and lights were placed directly on the final scene by using the interactive render in Corona.

For the stylistic choices for the images, we considered some photo references.
We mainly chose those bases on the Prairie House and the American suburbs in the ’60s. Because of the photographic references, the mood is in autumn. The lighting is the same as a clear morning after a rainy day, with a low sun and warm tones, which create long shadows that help the final composition of the image.
We didn’t use hdri but only Corona Sun + Sky with default  parameters;: Intensity 1.0 and Size 1.0.
NB: We chose a palette with warm colors for the atmosphere to integrate the materials used with the surrounding contest. 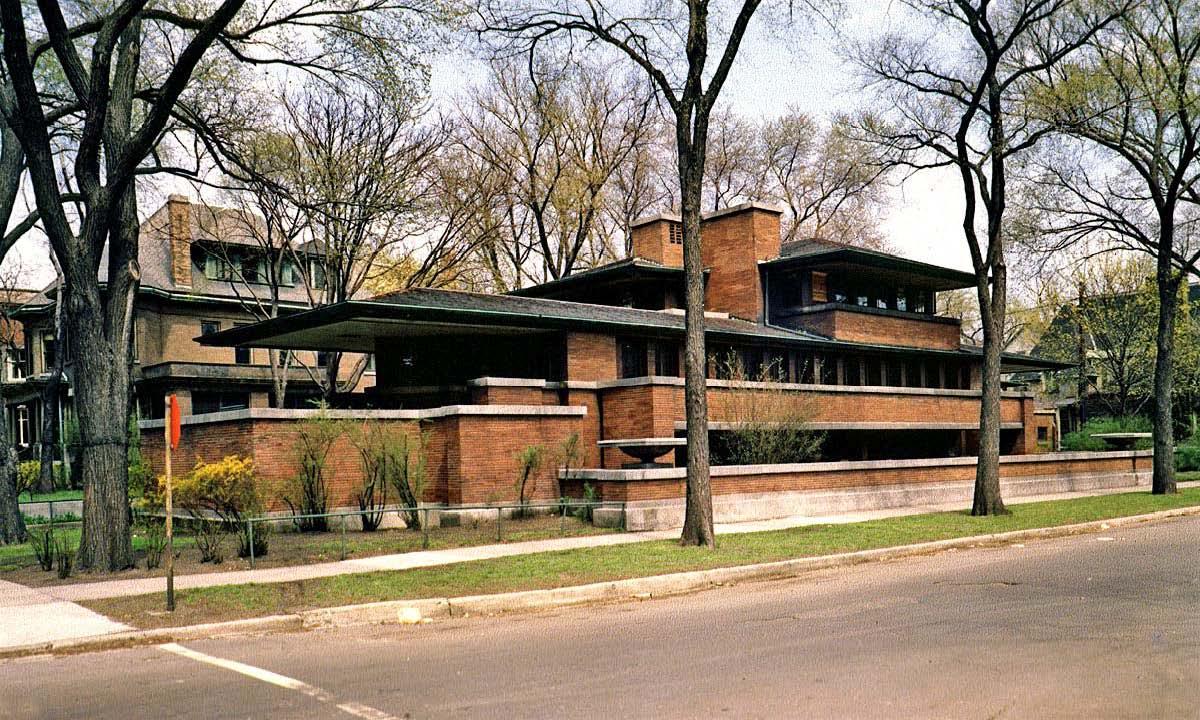 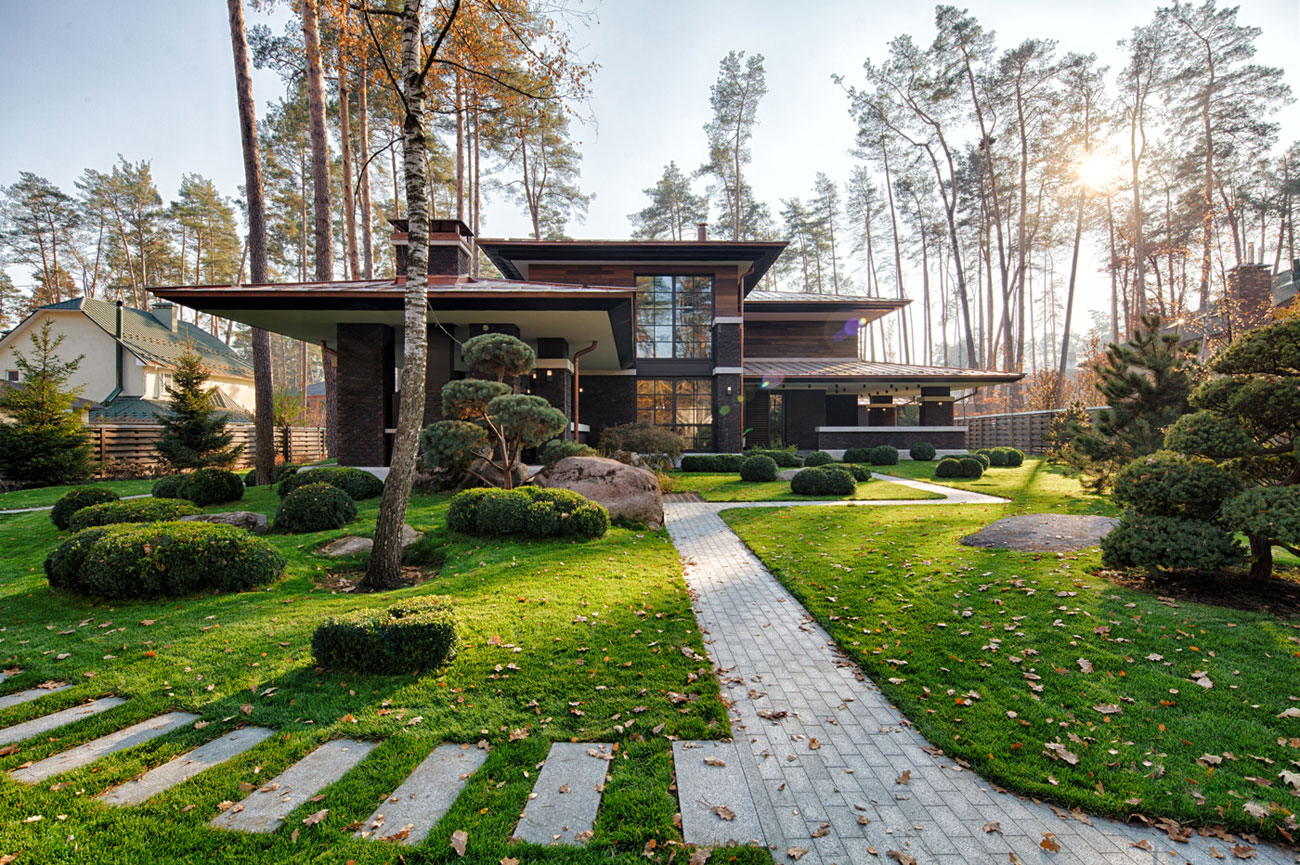 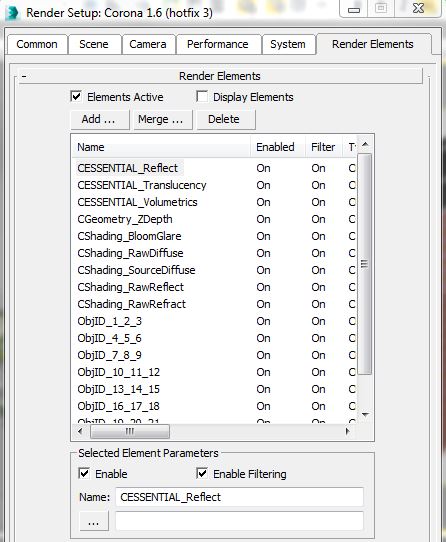 We enabled the Camera Depth of Field and used a custom aperture map.
In an images like this one taken with a wideangle lens, the DOF effect is less visible but it slightly increase the photo realism by breaking the perfection of digital images. 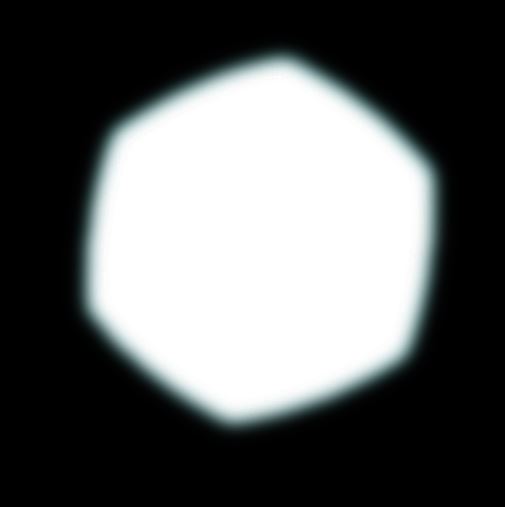 To emphasize the autumn mood but also to make the image lively and realistic, we introduced the Volumetric Fog.

When we work with this kind of projects, we give few space to post-production in order not to alter the photorealistic effect of the image.
We did a similar work to what a photographer would do when adjusting a Raw file:
Correction of contrasts and material reflections

Correction of contrasts and material reflections

Emphasis on the fog

Thanks for watching and we hope you enjoyed our tutorial.

This site uses Akismet to reduce spam. Learn how your comment data is processed.